As we collectively quarantine and practice social distancing by signing on to our Zoom room meetings or cast our Instagram Live, it makes us feel like we’re a little bit closer to each other. It gives us a sense of security and keeps us a little bit saner to see we are not alone in this scary time.

However, it makes me wonder if the habits we are creating now aren’t going to radically change the trajectory of the way we approach social media. How much or often are we going to be expected to be available for the world to see? Are we going to morph into a society expected to be in front of a screen and camera at all times?

I could get really conspiracy theory on this and wonder at what end does the tracking of every human citizen serve aside from the way the virus spreads? Is that all that’s being tracked? But all this is a side track to my initial point in writing this post. This post is about what it means to be an artist today and how much of ourselves must we expose in the process of making our art.

...what it means to be an artist today and how much of ourselves must we expose...

These days, artists of all kinds are expected to be available for public consumption. But a small and highly influential group of them has chosen to disappear from society in favor of letting their work speak for itself. For those of us old enough to remember an era when we didn’t account for our existence on social media, when we could attend a dinner party without being tagged like a shot deer on someone’s Instagram story, when privacy was respected and deeper meanings had room to quietly take root and bloom, this comes as no surprise.

Art, as Susan Sontag wrote in a 1967 essay, “The Aesthetics of Silence,” has acquired a spiritual quality in secular culture, becoming a place to reckon with and question the human project and, perhaps, even transcend it. To create, in other words, isn’t only about self-expression; it is also a realm of mystification, satisfying our “craving for the cloud of unknowing beyond knowledge and for the silence beyond speech,” as she puts it. Silence, then, is an essential part of the creative process, opening a space for contemplation. “So far as he is serious, the artist is continually tempted to sever the dialogue he has with an audience,” she goes on. To withdraw from the public is “the artist’s ultimate otherworldly gesture: by silence, he frees himself from servile bondage to the world, which appears as patron, client, consumer, antagonist, arbiter and distorter of his work.”

READ 'THE SHADOWS' ARTICLE
Like love, this experience of art is rare and real and wonderful and ultimately unpin-downable; like love, it is privately felt and personal in origin yet publicly affirmed by our culture. And so we seek to know more, to maybe even find ourselves in the artist’s story and become part of its mystery. It’s worth the risk, we think, of actually solving it.
Megan O’Grady
writer at large for T Magazine

“Even those of us who tend naturally toward solitary endeavors find ourselves running low on interiority these days.” 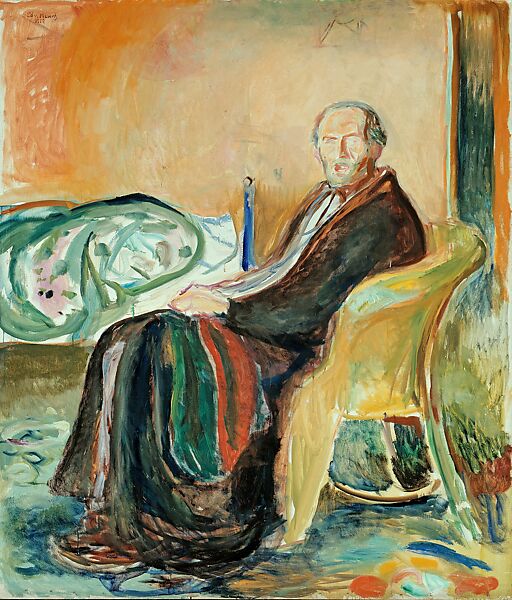 Self Portrait with the Spanish Flu
1919
Edvard Munch

Not long after, I think it was really right after to be honest, posting that Facebook post [see above] about taking some “me time” was it that I received a few Times articles, pushed to me via my phone’s notifications, (reminder to self, adjust notifications).
Quickly, feeling as though I was finding myself among a collective conscience, I began inhaling the words. Then knee jerk systematic response, posted links to My Artrepreneur Program private group page without any explanation or reason for posting. Too often I tend to be of the mindset that people will just “get it” and I forget that context and warming people up or selling it is best practice policy to get any attention. Not that I was looking for attention, just sharing.
I began to reply after the weekend had passed to my posting of the two different, yet to me, intertwined articles by Megan O’Grady. My post went on and on, so then began this blog article. I know everyone has an attention span sensitivity when it comes to what one is expecting to read on facebook versus diving into a blog post.
Sorry for just now replying, I started…
while my intent was just to share interesting reads, I’ll now put more reason to my action. The second article [Pandemic] I took more as a historical account of how artists lived and died in similar times of pestilence.
A big fan of Egon Schiele’s work, I had forgotten about his untimely death (just three days after that of his wife and unborn child) at the young age of 28, succumbing to the Spanish Flu of 1918. His mentor Gustav Klimt died of pneumonia earlier that year. Edvard Munch survived the Spanish Flu, going on to paint several self-portraits while he was in its grips.
The other article [quoted previously, from the NYT T Magazine Series “We Are Family.”] is a bit more existential? (or maybe I’m reading too much into it.) I haven’t read the whole series yet but this chapter brings up the question of the artist process and how (once) there was a great deal of privacy around it. But how today with social media and what have you, artists are now expected to be on and available, exposing and demystifying the process of art for public consumption.
The article then recounts some of history’s most notable Artists who defied that system, like Lee Lozano and her “Dropout Piece” c. 1970 to which she completely cut off communication first to women, then to the art scene in 1982 by moving from NY to Texas until her death in 1999 from cancer.
The term Artist of course used to speak of any creative field or vocation, goes on to speak of such pioneers as David Bowie and Martin Margiela. At which point the article begins tip toeing around the rabbit hole of fame and all it’s dark sides. Just before we fall in, we’re brought back to question…

How much do we really need to know about the person creating the work?

As I become increasingly too self-conscious of my own work and the outside world's perception of it, I wonder if my inclinations toward my obsession with camouflage and the act of making it the exact of opposite have anything do with my own desire of wanting to be different without being ostracized?

We as a society are enamored with the bleeding heart artist and their ability to see this world through unique vision and foresight. We love a good backstory-biopic-worthy tale to accompany the work, to wrap up everything together so tightly in hopes it might give us a glimpse behind the current, into figuring this life out. But is the life and times of the artist contingent on the work having merit or can the work stand alone?
Then I think of such greats as Pablo Picasso, he was a terrible human being, a misogynist, he sacrificed the lives of those close to him for his own needs, for his art. While these are documented and spoken of, they don’t erase the name of Picasso from the history books. The art lives on, higher than the human vessel. Many an artist led a tormented life, struggling between self and external forces. Outwardly available with such stories had Facebook been around to publicize the daily lives of artists like Francis Bacon, or Mark Rothko, or… whomever, would their work have suffered or flourished? Who’s to say?…

(This is now going more into my take-aways and personal, and of course jaded, feelings on today’s “see me” culture.)

Sometimes these days it feels like pouring your severed cancerous heart out is never enough, they’ve seen that and it’s all blasé, “so last week,” or worse so, it’s a symphony of crickets. You’re not even given the credit of anyone’s time or discourse. Just left in a volatile internet sea of void.

Thoughts of “its all been done before” and that it was done bigger and better or what’s the use in trying quickly fill the canvas. But I digress… because this is the anxiety of creation, the thought of the after before the now, time spent worrying instead of doing.

This is the space between insta-tumbl-book-tok-tweet-pin-snaps, the crushing feeling of desperate dopamine dependence based on the color of your soul. The giving in to trying to please everyone first, to being everybody’s everything, before something for oneself.

O’Grady comes off as a romantic to me, how could she not, wrapping the piece with likening the act of creating art with love.  The mysteries of the heart and what some might be so bold as to say the meaning of life (or something to that extent) are just that, mysteries. There’s one on every corner.
So where do we, the artists of the 21st century, stow such secrets? Or do we all just sell-out for the fame (if that’s even possible)? These questions don’t have answers, at least not unilaterally, they are up to each individual mind to make up for itself.
We are molded by time and space. Things happen to us, we process, react, then produce and potentially repeat several times over. In that process, we become ourselves. Most importantly by the act of defining ourselves through ourselves and not through the lens of someone else’s iPhone screen.

Sontag, Susan. “The Aesthetics of Silence.” Styles of Radical Will. 1969.

Murder, she sat down, and she wrote…

What’s that? Your cat is totally fine with you picking her up, snuggling her, and rubbing her angel-soft belly? That’s fine. Nobody’s jealous. Just stop talking about it.
— Read on www.wired.com/2014/10/cat-thinks-youre-huge-unpredictable-ape/

I don’t think I talk about my cat in this forum, maybe not ever… which is sad because he’s the best. My Buddy! His name is Buddy. Super original, I know. But that’s what he’s always been. Ever since he came in out of the cold off the mean streets of Washington, DC.

Now, he’s on the other side of the country from me and I’ve been thinking about that little guy…. So this is for all you cat people out there.

A question for the generations…

How far will we allow our egos to grow?
Can we come up with new ways of living, loving, and being….?
I ask because I do not have an answer. What do you think?

Photo/graphic: Feelin’ my Britney fantasy (circa 2005)

How far will we allow our egos to grow?

Can we come up with new ways of living, loving, and being….?

I ask because I do not have an answer. What do you think?

Photo/graphic: Feelin’ my Britney fantasy (circa 2005)

THANK YOU FOR YOUR SUPPORT